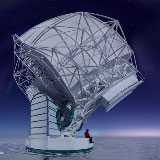 Jason Henning goes to the South Pole (the end of the earth) to study the beginning of the universe. After telling us how we know that the universe is expanding, Jason tells us the fascinating science of and history behind the cosmic microwave background (CMB), the faint afterglow of the Big Bang. Jason’s story includes how the CMB is used to learn about the composition and early history of the universe, as well as a fantastic travelogue about how you get and do science at the South Pole. Great science, great stories, great garb (that you can try on), and great pictures!

« Cancer Immunology » Pathogens, Vaccines and the Evolution Within Us