In this work, I led a team that used spectra of the galaxy clusters A2667 and A2390 obtained at the VLT in Chilé using the VIMOS IFU to look for thermally-produced axions in the 4.5-7.7 eV mass window, using their monochromatic decays to photons. If extant, such axions would produce a line signature in the cluster spectra, correlated with the dark-matter density profile. We were the first to perform such a search with a 10m-class telescope, using state-of-the art gravitational lensing maps of the dark-matter profile in these clusters. We put the tightest existing limits to the two-photon coupling of axions or axion-like particles in this mass window.

One leading dark matter candidate is the axion, a hypothetical particle proposed to deal with the strong-CP problem; more specifically, the axion is enlisted to dynamically drive the electric-dipole moment of the neutron to zero, thus satisfying experimental constraints without unsightly fine-tuning. The axion mass is apriori unconstrained; although constraints abound. In the ~eV mass window, axions would be thermally produced before BBN with relic density roughly equal to that of neutrinos or baryons. Such axions would not be cosmologically dominant, but they would be cosmologically important. Due to their two-photon coupling, such axions would decay to produce mono-chromatic line emission. I led a team to search for axionic decay emission in the galaxy clusters A2667 and A2390 using the VIMOS IFU at the VLT in Chilé. Our sensitivity improved on past work for two reasons. First of all, we have a 10-m class telescope at our disposal with plenty of integration time. Second of all, strong lensing maps tell us where this decay line is strongest, allowing optimal extraction of any putative axion signal. Our results impose the strongest existing limits on the two-photon coupling of the axion in the 4.5-7.7 eV mass window, shown below along with an image of A2390. 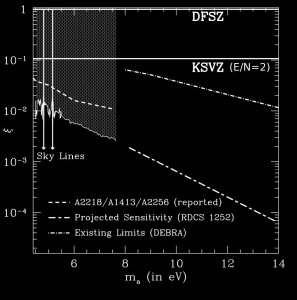 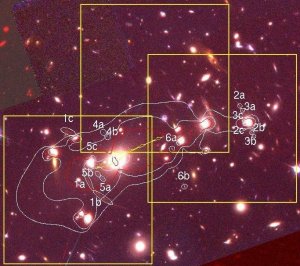